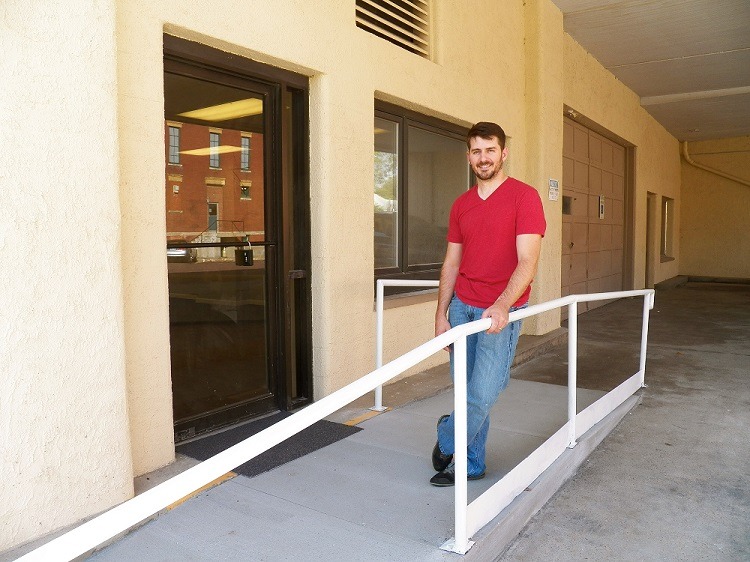 Article writen by Mary Winder originally published in The Kansas Chief on October 12, 2017.

Doniphan County area residents will soon have the convenient, new option of having prescriptions filled at a soon-to-be-opened pharmacy in Troy called D.C. Drug. The pharmacy will open on November 27 of this year.

This independent pharmacy, which is owned by pharmacist Doug Hynek and his wife Mary T. of rural Atchison, will be located at 101 N. Main in the office of the former Doniphan Electric Cooperative building.

“I’m very excited to be part of the community,” says Doug Hynek.  “My main goal is to take care of the people in the Troy and Doniphan County community.  Through the pharmacy, I want to provide residents with better access to health care and offer more convenience for them, too.”

“I think it’s a good thing!” he says.  “I’m very happy about it; I think everyone is!  It’ll be convenient for the citizens of Troy and really for the whole county.”

“D.C. Drug—the D.C. stands for Doniphan County—will offer full prescription service, free delivery in Troy, and curbside pick-up,” Hynek explains.  “We will be open on Monday through Friday from 9 a.m. to 6 p.m.  Our local phone number is 785-982-2500, and we have a website currently under construction that will be at DoniphanDrug.com.”

He adds that the pharmacy will also carry healthcare products such as vitamins, cough and cold medicines, Tylenol, Ibuprofen, braces, and crutches, as well as greeting cards, basic toiletries, and seasonal items like bug spray, sunscreen, and poison ivy remedies.  He will also offer immunizations (flu and shingles at this time).

“I plan to have what people are going to need.   I want to carry products that I recommend and know work,” Hynek says.

He also will offer medication counseling services and special packaging to help people remember to take their medications.  In addition, Hynek will help Medicare-eligible people with their Medicare Part D reviews.

“Open enrollment for Medicare Part D is October 15 though December 7,” he explains.  “I’ll have the answering machine on at the pharmacy after October 23 and will try to schedule appointments early in November through the end of open enrollment, so anyone who would like to come to D.C. Drug can review their medication plan and find the plan that saves them the most money and keeps them in town.”

Hynek will be hiring a full-time pharmacy technician to help serve the customers at D.C. Drug.  He hopes to hire someone with local ties.

Originally from Hanover, Kansas, Hynek earned a Doctorate in Pharmacy from the University of Kansas in 2013.  Prior to that, he had earned a B.S. in pharmaceutical sciences from that same institution.  He worked as a pharmacist at Auburn Pharmacy in Garnett, Kan. from May of 2013 to December of 2014 and has been a pharmacist with Kex Rx in Atchison since then.

“I’ve practiced with two independent pharmacy owners for the past four and one half-years, and I have learned a lot from them about how I want to practice,” says Hynek, age 31.  “I have always wanted to own my own pharmacy, and I felt the time was right for me to move on now.”

When Hynek and his wife began investigating the possibility of buying or opening an independent pharmacy earlier this year, they were hoping to stay in the Northeast Kansas area, since it is fairly close to family members.  They looked at several options in the area, including the possibility of Troy as a location for the business.

After conducting research into the numbers of prescriptions filled in the Troy and Doniphan County area and other related factors, Hynek found that the data shows this area could support a pharmacy.

“The more I looked into it, the more excited I got,” says Hynek, who describes himself as being business-minded.  “There clearly appears to be a need for a pharmacy here.  I think it’s a great opportunity!”

Hynek’s decision to locate the business in the former Doniphan Electric Cooperative building in Troy came about as a result of several things falling into place.  Doniphan County Economic Development Director Adrienne Korson had mentioned to Joe Koechner, owner of Kex Rx where Hynek is currently employed, that the building in Troy was for sale.  Later, H.K. Rush Farms, Inc. bought the building.

“They closed on the building on a Friday in June, and I was there later that same day to talk to them about leasing the office space for the pharmacy,” says Hynek.  “I signed a five-year lease with them a few days later.”

Hynek has renovated the space to create an appropriate floor plan for the pharmacy.  This work has included removing walls and old office dividers and counters, which opened up the space.  He also installed new flooring and a new drop ceiling, painted walls, re-wired and added internet ports, re-did some of the plumbing, and put in a new light grid and new custom door.  He salvaged some old fixtures that he will use in the new pharmacy.

L & L Construction and Emery Glass both of Atchison worked on the renovations.

Wayne and Cindy Rush have installed a new handicap-accessible entrance to the building.

“Wayne and Cindy have been really good to work with—so supportive,” Hynek says.  “They have been there for us beyond what being a landlord requires.  We have just felt welcomed and reassured by them that they were going to support us, and they have.  If they are representative of what the community is like in and around Troy, then my family and I are blessed to have the opportunity to be a part of it.”

He adds that Korson has also been very helpful, stopping by to check on him since he leased the space and offering him options for resources.  And Hynek is grateful to Koechner for being a “great mentor.”

According to Hynek, his wife has been supportive of his endeavor to open the pharmacy.

“I couldn’t have done this without her love and support,” he says.

Mary T. is the Director of Institutional Research and Assessment at Benedictine College in Atchison.  Originally from Booneville, MO., she has a Masters in public health in epidemiology from the University of North Carolina at Chapel Hill.  Doug and Mary T. have a ten-year old daughter, Evelyn, and a one-year-old son, Joseph.

Hynek is looking forward to the day the pharmacy in Troy is open for business.

“An independent pharmacy like D.C. Drug allows you to practice pharmacy the way it should be,” he says.  “I’ve worked in places where the pharmacy has made a big difference for the better in the community.   I want to do that here.”