Improvements at the County’s Grocery Stores

(Article originally published in The Kansas Chief, written and photos by Mary Winder)

March and April were very busy months for the respective owners of two Doniphan County grocery stores, as they completed several upgrades at their businesses. The improvements took place at John’s Market in Troy and Simpson’s AF Super in Wathena.

John Mike and Laurie Simpson, owners of John’s Market, replaced all of the coolers and freezers in their store.

“The old dairy, produce, and meat coolers were the type that are open on the top,” explains Laurie, noting that their dairy cooler was 53 years old. “The new coolers and freezers are all the type with doors, and they are also more energy efficient.”

With this change, the Simpsons added a lot more freezer space.

“We’ve added five more doors of frozen food,” Laurie notes, “so we can offer so much more selection now.”

There are now 20 doors for frozen food items, 17 doors for dairy and meat products, and 6 doors for produce. All of the new freezers and coolers utilize LED lighting. Several different products, including bread and pop, were moved to different sections of the store as a result of the new coolers and freezers being installed.

“We think this turned out well,” says Laurie of the new coolers and freezers, “and we are very happy to be able to offer more selection. The public’s response has been positive. People have told us they are happy with the selection. And we’re still adding new items as we go.”

John Mike explains that the grocery store was awarded a USDA grant through the Rural Energy for America Program (REAP) that paid for about 25 percent of the cost of the cooler and freezer replacement project.

“Our old coolers and freezers were inefficient, and we knew we were going to need to replace them,” Laurie says. “When we got the grant, that helped us decide to go ahead and do the whole project at one time.”

“K-State assisted us by performing an energy audit, which was required for the grant application,” explains John Mike. “To qualify, you had to show you’d save a certain percentage on energy use. K-State also helped us fill out the application.”

“We’re still waiting to see how the new coolers and freezers will affect our electric bill,” he adds.

The Simpsons note that there are a few cosmetic tasks they still intend to do to put the finishing touches on the project.

Another update at John’s Market is the installation of new checkout stands and scanners at the store. The scanners replace the older-style cash registers that required all of the items in the store to be hand-marked.

“The scanners will be so much easier for the cashiers,” explains Laurie, noting that they will no longer be required to memorize weekly sale prices. “It will also be more convenient for the customers, because we are now able to provide Apple Pay and Android Pay, for those who have this ability on their phones, in addition to using credit and debit cards.”

With the new scanners, store employees will no longer have to hand-mark each item in the store with a price.

“From hand-marking every item in the store with a price gun to paying with your cell phone, we’ve come a long way in our technology,” Laurie says. “It’s a pretty drastic change on our end. It’s a new stage for the store!” 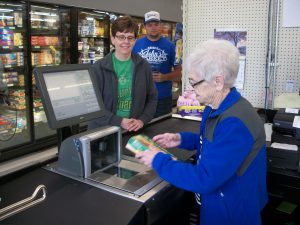 Laurie says the company that installed the scanners has been good to work with in terms of answering questions and training people at the store to use the new systems. The scanners allow the Simpsons to utilize more options offered by their supplier, which benefits their customers.

Another update at John’s Market is the replacement of all light fixtures with LED lighting to help make the business more energy-efficient. In addition, the store is beginning to offer fresh flowers for sale for certain occasions, such as Valentine’s Day and Mother’s Day. The flowers are stored in a special cooler. These updates, as well as the installation of the new coolers, freezers, and scanners all took place in March and April of this year.

“We’re very pleased with all of these improvements,” says John Mike, who has owned John’s Market with his wife since 1994. He is the third generation in his family to own the grocery, which has been at its current location for about 53 years.

“We’d like to invite people to stop by to see all of our improvements and all of our new selections,” adds Laurie.

Ulas and Joyce Simpson, owners of Simpson’s AF Super since 1978, added touchscreens for the cash register systems and a new, larger meat case in the Wathena grocery store. Both of these improvements were done in March of 2017.

“The keyboards on the registers wore out, and we couldn’t replace them with keyboards anymore, so we updated to the touchscreens,” Ulas explains. “We wanted something the customer could rely on and have faith in, and something that would be accurate.”

“Also, our old meat case wore out, so we had to update,” he adds. “We wanted to try to get something that was larger and highly efficient. With the new larger case, we can offer more meat for customers and save on electricity. We also enlarged the preparation area behind the meat counter.” 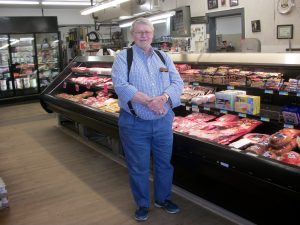 Ulas believes these are good improvements for the customers and for the business.

“With the larger meat case, we can offer more cuts of meat and display them better,” he says. “The customers seem to really like that.”

“We sell a lot of meat,” he adds. “We use the whole chuck when we make ground chuck, and that gives the meat a real good flavor.

About 10 months ago, the Simpsons also installed a cold deli cooler/meat case at the grocery store.

“We have 30 different kinds of cheeses and about the same with lunchmeat,” says Ulas, noting that he believes the meats and cheeses sliced fresh at the deli taste better.

Ulas says that he has also expanded the hardware department at the store, so people don’t have to drive out of town to make purchases of that type. In the future, he says he would like to expand the produce department, as well.

“We’re trying to make improvements and trying to keep as much business as we can here in town,” he says.

Both Simpson’s in Wathena and John’s Market in Troy changed their suppliers last year. Both now obtain their stock from Associated Wholesale Grocers out of Kansas City.

“That was quite an adjustment,” Ulas says. “It was a little rough for awhile, but it’s getting better now. We are able to offer more deals through the pallet program they have, which gives the customers a good buy.”

Laurie agrees that switching to the new supplier took some getting used to, but it is working out well now.

“The warehouse has been very good to us,” she says. “They sent their employees here to help with the transition.”

“I think they’re giving us good service,” adds John Mike, noting that one of the benefits they are able to offer the store’s customers is the Temporary Price Reductions, “and they’re offering us a wide selection of products.”

The owners of these Doniphan County stores all believe that having a hometown grocery store is very important for the communities they serve.

“It is a challenge to compete with the big chain stores,” says Laurie. “We all do our best to stay competitive. And we really appreciate people being loyal to our business.”