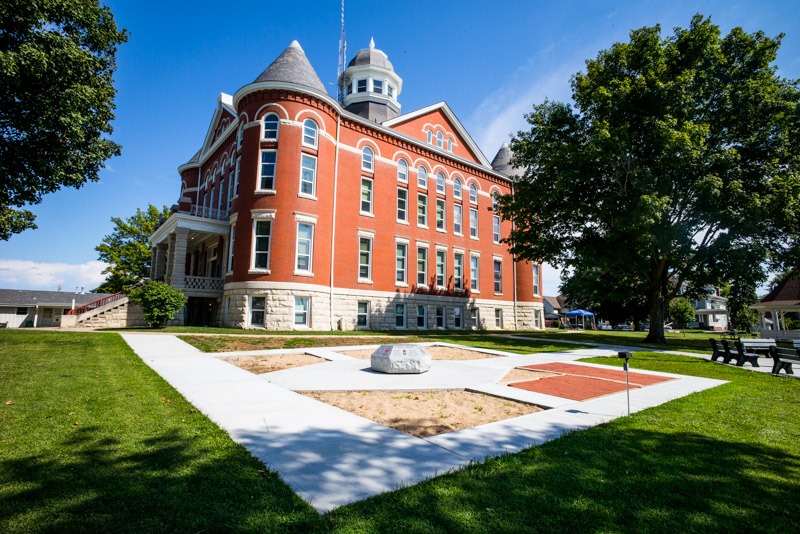 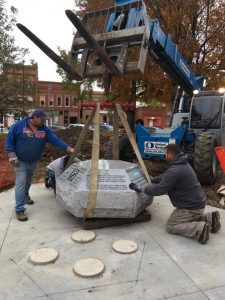 On November 7, 2016 the Doniphan County Vet Memorial monument, created by Byrd Memorial out of Atchison, KS, was set in its new home in the northwest courtyard of the historic Doniphan County courthouse in Troy, Kansas. The memorial is being established in honor of all those brave men and women from Doniphan County who have served or who are currently serving in the military.

This noble project has been in the works for about 2 years, when it was first introduced and members of the Doniphan County American Legion Post 55 decided to pursue the project. Dave Clark has been one of the instrumental forces behind moving this project along. He has advised that there has been several people involved with the successful planning and implementation of the memorial to make it possible. Including Peggy Franken, County Clerk, wrote a grant to Northeast Kansas Department of Health and Environment that to install benches made from recycled tires. Each bench represents a branch of the military, including one bench that no one will sit on to remember the missing soldiers that are “gone but never forgotten.”

The Memorial in some ways will be a never ending project. The multi-thousand dollar project is being funded through donations and the purchase of bricks. The bricks cost $75, each brick has the ability to hold 15 letters on each line and the purchaser of the brick will choose what the print on the brick will say. These bricks are always going to be available to purchase. The hope is that someday the whole courtyard will be filled with bricks representing the names of those who served.

If interested in purchasing bricks or making a donation please see the form here, or they can be picked up at any of the Doniphan County Banks or at Clark’s Land Surveying in Troy. Your donation is tax-deductible and can be mailed to: